Traditionally, therapies have attempted to change perceptions of the world by means of reason and insight, with conditioning and behavior modification, or with drugs and medications. The trauma response is a set of defensive bodily reactions that people initially mobilize in order to protect themselves, both from threat, and then later, against feeling the crushing totality of their horror, helplessness and pain. However, as time goes on, this avoidance keeps them frozen and stuck in the past, unable to be fully present, in the here and now, and unable to go forward in life. Fixed in the defensive trauma response, the shame, defeat and humiliation, associated with the original event replays itself over and over again in the body. Dr. Levine explores the implications of Body-oriented psychotherapy and recent findings in the neurosciences, on how the brain and body deals with emotional information. 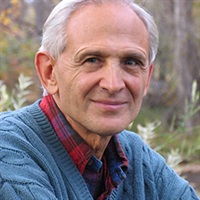 Peter A. Levine, PhD, holds doctorates in both medical biophysics and psychology. He is the developer of Somatic Experiencing®, a naturalistic, body-awareness approach to healing trauma, and founder of the Somatic Experiencing® Trauma Institute, which conducts SE™ trainings throughout the world and in various indigenous cultures. Some of Dr. Levine’s other achievements include being a stress consultant for NASA during the development of the space shuttle project, as well as a consultant to the Sandia Labs during their report on preventing terrorism commissioned by the Department of Homeland Security in 2002. Dr. Levine was a member of the APA Task Force: Psychologists for Social Responsibility in developing responses to large-scale disasters and ethno-political warfare. He is currently a Senior Fellow and consultant at The Meadows Addiction and Trauma Treatment Center in Wickenburg, Arizona.