Prevalent views of higher brain functions are based on the notions of computation and information processing. Various lines of evidence appear to be incompatible with this position and suggest instead that the brain operates according to a set of selectional principles. A theory addressing these principles, called Neural Darwinism, will be discussed. This theory has a direct bearing on our understanding of the neural basis of consciousness, a key issue in psychotherapy. 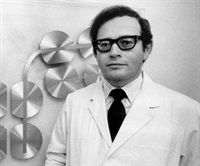 Gerald M. Edelman, MD, PhD, was Director of The Neurosciences Institute in La Jolla, California and Professor at The Scripps Research Institute. In 1972, he received the Nobel Prize in Physiology or Medicine for his work on the structure and function of antibodies. Subsequently, Dr. Edelman formulated a detailed theory to explain the development and organization of higher brain function, described in his 1987 volume, Neural Darwinism and elaborated in a theory of consciousness presented in his books,The Remembered Present and Wider than the Sky.

Edelman founded and directed The Neurosciences Institute, a nonprofit research center in San Diego that between 1993 and 2012 studied the biological bases of higher brain function in humans. He served on the scientific board of the World Knowledge Dialogue project.