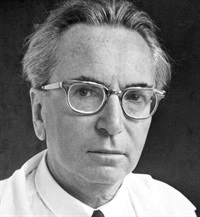 Viktor Emil Frankl, MD, PhD, was an Austrian neurologist and psychiatrist as well as a Holocaust survivor. Frankl was the founder of logotherapy, which is a form of existential analysis, the "Third Viennese School of Psychotherapy". He received his MD and PhD degrees from the University of Vienna where he studied psychiatry and neurology, focusing on the areas of suicide and depression.

His best-selling book Man's Search for Meaning (published under a different title in 1959: From Death-Camp to Existentialism, and originally published in 1946 as Trotzdem Ja Zum Leben Sagen: Ein Psychologe erlebt das Konzentrationslager, meaning Nevertheless, Say "Yes" to Life: A Psychologist Experiences the Concentration Camp) chronicles his experiences as a concentration camp inmate, which led him to discover the importance of finding meaning in all forms of existence, even the most brutal ones, and thus, a reason to continue living. Frankl became one of the key figures in existential therapy and a prominent source of inspiration for humanistic psychologists.