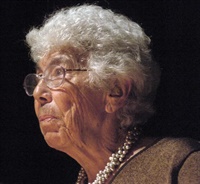 Sophie Freud, PhD, is the daughter of the lawyer Jean-Martin Freud , the eldest son of Sigmund Freud. Together with her mother Ernestine Freud, after Austria's annexation to the German Reich in November 1942 , she was able to emigrate to the USA via France, where she attended college. In 1946 she went to Boston where she trained as a social worker, which she completed in 1948. She then worked as a social worker and lecturer.

In 1967 Freud began studying at the private Brandeis University in Waltham, which she completed with a doctorate in 1970. She then worked as a lecturer at Simmons College in Boston, then from 1978 until her retirement in 1992 as a professor at the School of Social Work there. After her retirement, she taught, researched, continued to teach, gave public lectures and participated in scientific conferences.